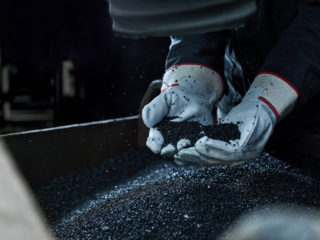 Iron Silicate under the brand name of Granos

Iron silicate is a by-product produced during smelting when slag is quenched in water resulting in angular granules that are processed into abrasive.

This results in the surface getting sanded which is common to remove surface contaminants. It is also possible to use abrasive blasting to smoothen surfaces with less pressure. Iron Silicate is also known as fayalite, Fe2SiO4 exists in nature as a component of the crystalline solid solution known as magnesium iron silicate (olivine). The high quality iron silicate made in Brixlegg is well known all over the world an can be used in wide range of industrial applications (construction, iron production and concrete manufacturing).

You have questions about our iron silicate?